I sat in a waiting room chair, eyes glued to my phone as I watched my wife, Cesi, get comfortable on a hospital bed and await her first ultrasound. Due to the burgeoning global pandemic, I was not allowed to accompany her, and so I was viewing the proceedings over a spotty FaceTime connection. What should have been a joyous yet intimate moment, where I held my wife’s hand as through tear-filled eyes we caught our first breathtaking glimpse of the miracle of life taking shape inside her womb, instead felt more like viewing a YouTube unboxing video, except the internet personality is my terrified wife, and the latest gadget is actually our new baby. “FIRST BABY ULTRASOUND!! (BOY OR GIRL?? VOTE IN COMMENTS): SPONSORED BY NINTENDO!”

Soon the doctor arrived, and we made awkward small talk as she prepped for the ultrasound. All I could see was my wife’s dimly lit face and the ultrasound screen rendered in blocky detail on my phone, which I held approximately 3” from my face for the duration of the visit. Equal parts excited and nervous, I watched as the doctor began manipulating the wand, and sure enough, a little blob soon appeared on the screen. Cesi and I shared a brief glance full of awe and wonder and terror–“What did we get ourselves into?!”–and went back to staring at the screen… just in time to hear the doctor say “Hmmmm…” in a concerned voice and start to frown.

Of all the things we could have heard from the doctor, “concerned hmmmm” was extremely high on our “dear God I hope they never say this” list. Neither of us could muster the courage to ask what was going on, so we waited in horrified silence, both fearing the worst, as the doctor’s frown deepened while she poked around on her machine. What she told us next would not have crossed our minds in a million years: “I think… there’s a second fetus?”

Once it was confirmed that Cesi was indeed having twins, we settled in for what promised to be a wild ride. And what a ride it has been! As I write this post, Cesi has just begun her third trimester carrying two identical twin girls, and we couldn’t be more excited (or terrified) for the insanity about to descend on our quiet condo. To catch you all up, here’s a recap of what we’ve been through these past six months.

Soon after that first ultrasound, it became crystal clear what the doctors and nurses had meant when they warned us that twin pregnancies come with a double helping of pregnancy symptoms and hormones. First, Cesi’s sleep schedule quickly ramped up from a comfortable 7-8 hours per day to an angsty-teenaged-boy-esque 16-20 hours per day. That number is not an exaggeration. Had she not been working from home due to the pandemic, we have no idea how she would have survived the exhausting commute and nine hour workdays. She will also tell you that this sleep was not in any way satisfying; never did she wake up feeling refreshed and ready to go. As if that wasn’t enough, morning sickness arrived shortly thereafter. I feel compelled to point out that “morning sickness” is a bit of a misnomer. Breakfast, second breakfast, elevenses, luncheon, afternoon tea, dinner, supper.. there’s not a meal my poor wife didn’t present to the porcelain throne. 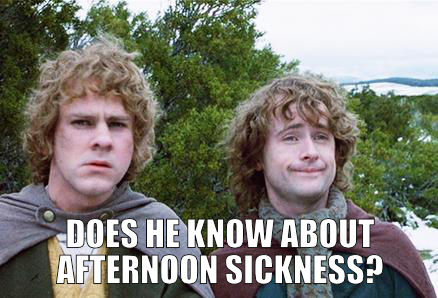 As you can imagine, we didn’t have time to plan much of anything, so we just put our heads down and focused on surviving. Bump-wise, she started showing in month two, which was yet another clue that twin pregnancies do not mess around. This stood in stark contrast to one of Cesi’s best friends, who successfully hid her pregnancy from Cesi for six months despite the fact that they were roommates. To all such mothers blessed with relatively symptom-free pregnancies, my wife is super happy for you but can’t promise she won’t strangle you if you bring it up more than once.

Sweet relief! Once we slogged our way to the end of month four, her energy came rushing back and her morning sickness evaporated. Fully aware that time was short, we dove headlong into baby preparations. Cesi bought stacks of books; I googled “how much do babies cost” and wept in the shower. Cesi pinned endless pristinely decorated (and suspiciously baby-free) nursery photos; I forced myself to watch YouTube videos of twin deliveries and tried not to faint. Cesi went to so many doctor visits and ultrasounds and tests we lost count; I watched over FaceTime when I could and treasured grainy ultrasound printouts when I couldn’t.

During one of those visits, the doctors grew visibly concerned over the size of Twin B and the fluid levels in her amniotic sac. Cesi is carrying what are known as “monochorionic, diamniotic” twins - sometimes called mono di or MCDA twins - which means that while both babies share the same placenta in the womb, they are each inside their own amniotic sacs. In an ideal world, both twins would receive an equal amount of resources from their shared placenta; in real life, this is not always the case, and when that discrepancy is high enough it is classified as Twin-Twin Transfusion Syndrome, or TTTS - this is what was worrying the doctors. Twin A’s sac appeared to have significantly more fluid than normal, while Twin B had proportionally less. However, they were not confident enough to make the diagnosis, so they requested that she come back a week later.

As we drove home, I attempted to cheer her up by noting the apparent lack of urgency shown by scheduling the next appointment so far in the future - if they were truly worried, would they not have tried to fit you in as soon as possible? This seemed to help somewhat. But of course, not five minutes later, the hospital called: Could she come back tomorrow? Two twin specialists from one of the top-ranked children’s hospitals in the nation freed up their schedule to see her as soon as possible. Her next words to me were, “CAN I PANIC NOW?!”

After a night with a little sleep and a lot of prayer, she went back to the hospital. The nurse who accompanied her to the room asked her why I wasn’t there; when she replied that I hadn’t been allowed at any previous appointments, the nurse responded that they do allow spouses when something is seriously wrong. Talk about bedside manner! Eventually, the specialists arrived, and thus commenced what Cesi remembers as one of the stranger hours of her life. For sixty minutes, each specialist took turns poking, prodding, and scanning her belly in what she can only describe as the attitude of a gleeful middle schooler excitedly dissecting his first shark. Notwithstanding the gravity of the situation, they oohed, ahhed, pointed, theorized, and shook their heads in awe while completely ignoring everyone else in the room, including the terrified person attached to the stomach they so eagerly examined.

In the end, they determined the twins were within normal parameters, but barely. Cesi would need to be monitored closely in the weeks and months to come. With that raincloud looming ominously overhead, we soldiered on, buying and organizing and decorating and planning and praying that the little life forms growing in Cesi’s belly would stay healthy.

We are now a few weeks into what could be best described as “the deep breath before the plunge.” The physical respite Cesi enjoyed during the second trimester is coming to an end: Back pain, pelvic pain, joint pain, constant swelling, headaches, nosebleeds, fatigue, and the twins’ endless kicking all serve to remind her of the madness that is yet to come. With twins, it is not recommend to go more than 36 weeks, so we are looking at a due date less than eight weeks away. We are realizing just how much is left to do and how woefully unprepared we really are for two babies to invade our lives! And yet, the joy and anticipation we experience feeling the babies kick and punch and squirm in Cesi’s womb keeps us going and reminds us why we’re doing all this in the first place. Bring it on!

For those who might want to keep up with our day-to-day experiences pre- and post-delivery, I’m experimenting with a companion Twitter-esque mini-site for short, quick, much more frequent updates. You can find it here: updates.cesiandalex.com. See you soon!

Just a few short weeks ago, Cesi and I celebrated a pretty exciting life milestone - the earth has rotated...